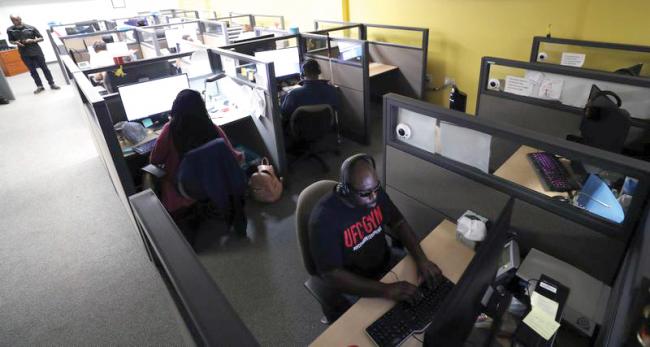 A 9-year-old Orlando company created to give visually impaired workers a shot at decent jobs is being tapped to help rescue Florida’s overwhelmed unemployment application system — and the company is now feverishly hiring.

“We needed people yesterday,” said Kyle Johnson, president and CEO of Lighthouse Works, a $5.5-million-a-year enterprise that’s looking to beef up its customer call center operation with both sighted and visually impaired workers. “We already have this honorable mission, and now we have the privilege of being there for Floridians who are just terrified about how they’re going to feed their families. We can help them.”

In early April, the state’s Department of Economic Opportunity contracted with four call centers, including Lighthouse Works, to handle a skyrocketing influx of inquiries. Calls shot up from 24,000 a week in early March to more than 864,000 by month’s end, leaving tens of thousands of calls simply unanswered.

And at a time when many nonprofits are struggling themselves — with dwindling donations and canceled fundraising events — Lighthouse Works welcomed the chance to buck the trend.

The organization is the social enterprise of sister nonprofit Lighthouse Central Florida, which runs educational and rehabilitation programs for children and adults who are visually impaired.

The 15-month contract with the state will bring in an additional $2.1 million to Lighthouse Works, which is also producing hand sanitizer and will soon supply personal protective equipment to hospitals and assisted living facilities.

For the call center, Johnson will need to fill 50 full-time positions. More than half of the workers must be visually impaired — currently more than 90 percent are — and because some recruits may opt for part-time work to preserve disability benefits, Johnson expects to hire as many as 70 employees.

The pay isn’t great — initially $10 to $11 an hour — but it’s a starting point for a community where nearly 70 percent of working-age adults lack full-time jobs. And Lighthouse also offers opportunities to advance, full benefits for workers who put in at least 32 hours a week and, its employees said, a unique culture.

“Sometimes you have companies that have a mission statement to help individuals for whatever disability, but not all the time do they have those individuals actually employed,” said Roderick Thomas, 44, a call center worker who graduated from FAMU law school after losing his sight and is now studying for the Florida Bar. “Lighthouse gives you wonderful training [and] dynamic people that can relate to you. … It’s not like you against the world.”

But neither is it a sheltered workshop environment once typical of employment opportunities for people with disabilities. At its headquarters in a warehouse district south of downtown Orlando, Lighthouse Works hires based on skills and aptitude and provides paid training.

And since call center staffers are dealing with people who’ve often spent long hours over several days trying unsuccessfully to file for unemployment benefits, the work is decidedly challenging.

“Just five minutes ago I finally was able to get an application filed for a gentleman who is blind and deaf, and he was having problems getting into the system,” said Todd La Flame, a call center team leader.

Through telephone relay technology, La Flame, who is visually impaired himself, had been communicating with the man for two weeks, spending hours trying to work through systemic hurdles caused by an initial error when the man tried to file himself.

“Our job is to address all the issues to get a resolution,” he said. “Right now I kind of want to do a happy dance.”