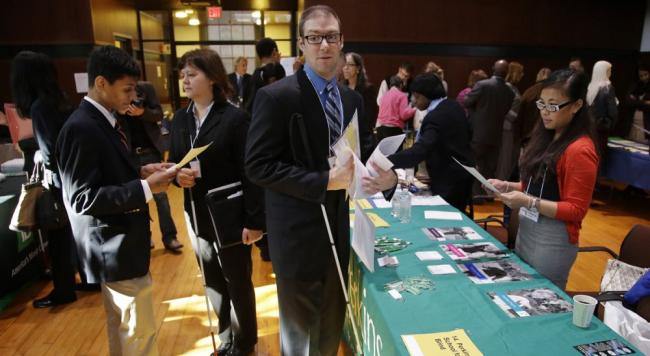 As a recruiting manager staffing for clients such as Google and Apple, I was concerned about three things: experience, unemployment gaps, and the probability of the person becoming a long-term employee.

I interviewed few disabled candidates and rarely considered their job prospects. As a recruiter, I rarely debated if and how they would be able to perform the duties of a position. I soon found a new perspective — one that changed the way I viewed both the role of the recruiter and the place of people with disabilities in the job market.

A Shift in Thinking

I was attacked more than six years — a beating that caused severe retinal trauma, which left me blind. A year after the attack, I found myself at California’s Orientation Center for the Blind, learning new ways to complete necessary daily tasks. Most significantly, I learned that while I had helped place hundreds of people into positions at top companies, my opportunities and chances of finding a job were slim.

Members of the blind community warned me that I would need a lot of patience when I began my job search. I now belonged to a group of people erroneously viewed by recruiters as unskilled, unproductive, and more difficult. I didn’t need my guide dog, Madge, to sniff out the irony of my new situation.

According to University of Illinois at Chicago professor and disabilities studies scholar Dr. Lennard Davis, these stereotypes exist in part because people’s misconceptions of the blind are split between thinking they’re completely helpless or brimming with superpowers. These misconceptions carry over into the business world and can seriously confuse potential employers.

The Misconceptions of Managers

According to a recent study done by the nonprofit National Industries for the Blind (NIB), out of 3.5 million blind Americans of working age, a walloping 70 percent are not employed. And of the 30 percent working, the majority work for blind organizations.

One major reason blind people struggle to find employment is that public misconceptions of the blind affect hiring managers’ perceptions of potential candidates who are visually impaired. I’d like to break down a few of these — put out by the NIB study — and discuss why these misconceptions are fallacies.

“Among hiring managers, most respondents (54 percent) felt there were few jobs at their company that blind employees could perform, and 45 percent said accommodating such workers would require ‘considerable expense.”

The reality is that a blind person can do any job that involves a computer, and there are a slew of adaptive tech toys that make most jobs accessible, such as a portable scanner to read printed material. As for the purported expense, according to The American Foundation for the Blind, most accommodations cost less than $1,000, a negligible amount for a serious business.

“Forty-two percent of hiring managers believe blind employees need someone to assist them on the job; 34 percent said blind workers are more likely to have work-related accidents.”

This fear can be attributed to some of our common idioms, e.g., “It’s like the blind leading the blind.” This phrase implies poor navigation skills, when the reality is that blind people often have superb orientation skills due to hours of training by mobility experts. Far from being clumsy, the visually impaired have an attention to detail that most sighted people lack. Insurance statistics back this up: Blind people actually have better safety records than their sighted colleagues.

In reality, blind people don’t actually miss more time from work. A DuPont study, completed during a 25-year span, found that disabled people, in general, have better attendance than 90 percent of their non-disabled colleagues.

The disabled did not get their rights during the Civil Rights movement and had to wait until the ‘90s for the Americans with Disabilities Act to pass. Even now, many people assume the blind are unemployable. As a former recruiter, I realize there are different requirements and considerations that need to be addressed when hiring a visually impaired individual, but without changing our perspective on the capabilities of the blind, we can never end the discrimination that still takes place.

Some companies such as Google, Apple, and Yahoo! routinely hire visually impaired employees. The U.S. government — especially the CIA, the Department of Rehabilitation, and the Social Security Agency — also hires many visually impaired people.

Jobs capitalizing on the unique skills the blind develop are also being created. Givaudan, a company in the fragrance and flavors business, has developed a special internship program designed to give the blind work experience. Participants evaluate fragrances, detecting subtle differences that aid the creative team.

It will take some time to abolish blind stereotypes. However, both the blind and sighted people can contribute to the shift.

How Managers Can Improve Inclusivity

Prejudices toward the blind workforce are not beyond repair. In addition to a “lead by example” role that managers can take, they can also become more inclusive by reaching out to groups that cater to the blind to recruit for potential new hires.

Encourage your human resources department to diversify its pipeline of candidates by recruiting from employment programs at organizations such as LightHouse in San Francisco and The Lions Center for the Blind. Hiring a blind person for an internship not only gives him job experience but also will encourage others to be more open to considering a person who is blind for a position in the future.

If a company is serious about inclusivity, then it is also very important that its website and job application portal be ADA compliant. Companies can also demonstrate a commitment to diversity by portraying blind people in their recruitment advertising.

How the Blind Can Increase Their Chances of Hire

The reality is that we live in a sighted world, and stereotypes pervade the workplace. For people without sight, bring your adaptive equipment along to interviews to demonstrate how you would complete required tasks to give the hiring manager the insight he needs to make a decision.

Network in the blind community and get to know people in your line of work. If you know of a person who is blind and doing the job similar to the one you are applying for, get advice from him and obtain a reference if you can. Telling a hiring manager about another blind person in a similar role can help you land the job. Finally, do not hesitate to report a company if you believe you were discriminated against.

How Sighted People Can Help

If you work for a company that does not feature people with disabilities on its employment page, let your employer know he is not being inclusive. You can also ask your employer, school, and friends what they are doing to acknowledge disability awareness month in October.

Education helps young people crush outdated beliefs at an early age. In California, the FAIR Education Act, which passed in 2011, requires public schools to include disability education. If you are a parent outside of California, demand your school district to add disability studies to its curriculum.

Finally, perform a quick Google search any time a disabilities stereotype crosses your mind. Educating yourself on the truth about disabilities is the best way to eliminate outdated stereotypes.

It will take time to change the collective consciousness of society and root out wrongful discrimination against people with disabilities. However, people can help by educating themselves about issues facing blind people today, discouraging outdated stereotypes, and working to encourage inclusivity in their workplaces.

Belo Cipriani is a freelance writer, speaker, and author of Blind: A Memoir. Belo was the keynote speaker for the 2011 Americans with Disabilities Act celebration in San Francisco and was a guest lecturer at both Yale University and the University of San Francisco. Amber Clovers, his first work of fiction, will be published in 2013. He welcomes anyone to reach out to him at belocipriani.com or on Twitter @Beloism and Google+.