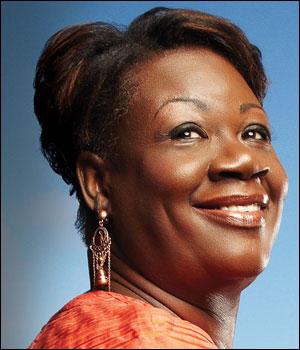 In an effort to create awareness and bolster opportunities to address the growing needs of Central Florida's blind and visually impaired community, Lighthouse Central Florida today named author and motivator, Dr. Lucille O'Neal, as the first member of its new Ambassadors Council.

Best known as "Shaquille O'Neal's mom", Dr. O'Neal is also a committed humanitarian and community activist who has dedicated herself to supporting various causes related to education and health care. “In Central Florida alone it’s estimated that there are between 80,000-100,000 individuals who could benefit from the services of Lighthouse Central Florida—unfortunately this organization, that works to transform lives, serves less than 700 individuals annually,” said Dr. O’Neal, who plans to focus her education efforts on the region’s African American community where the prevalence of diabetes, and in turn diabetic eye disease, is most pronounced.

“Learning to manage your diabetes is truly critical if someone wants to slow the progression of vision complications like diabetic retinopathy—I’m really excited to be a part of this important movement!” Dr. O’Neal added.

Lighthouse's Ambassadors Council is an initiative recently launched by its board of directors as a way to harness the influence of well-known Florida residents whose philanthropic leanings align with the core values and mission of Lighthouse Central Florida.

"We must increase attention, visibility, and appreciation for vision rehabilitation services in Central Florida if we are to address the projections indicating severe vision impairment and blindness will double over the next three decades,” said Lee Nasehi, president and CEO of Lighthouse Central Florida and Lighthouse Works. "Dr. O’Neal’s willingness to help carry our message to the masses through our Ambassadors Council in a huge step toward educating communities most at risk for developing an eye condition that could lead to vision loss.”

According to Prevent Blindness America, the number of Florida residents with impaired vision, including blindness, could more than double over the next three decades. The direct and indirect costs of vision problems, among all age groups statewide, total an amount just shy of $10 billion! If appropriate preventive and rehabilitative steps are not taken, costs will burgeon as the population of Florida ages and the life expectancy increases.

The mission of the Ambassadors Council is to create awareness and opportunities to address the growing need for services for those seeking life beyond the restrictions of vision impairment and blindness in Central Florida.